The last two-and-a-half million years of Earth’s history are distinguished by the climatic cycle of glacial and inter-glacial ages and are referred to, in geologic terminology, as the Quaternary Period or the overlying Pleistocene Epoch. Instead of one prolonged Ice Age, as was initially believed, that increasingly built up and then slowly melted away, it is now accepted that as many as forty oscillations have occurred across that span, into and out of glacial periods. The mechanism deemed responsible for fostering these alternations – Milankovitch cycles, recognizes the combination of the planet’s axial tilt and regular elongation and retraction of its orbit as a variable. The amount of solar radiation that reaches Earth is affected, resulting in average temperature swings over time. The relevant mystery lies with the extreme suddenness of the last glacial episode’s termination and the transition to our current inter-glacial stasis, which cannot be adequately explained by these overlapping incremental variations.

During this last Late Wisconsin Ice Age, the planet’s hydrological budget was redistributed so that sea level dropped close to four hundred feet. Liquid water was converted into almost seven million cubic miles of packed and frozen snow that composed the northern hemisphere’s vast continental sheets. A similar volume shields Antarctica today. Melting that immense quantity of ice in a few thousand years would require a heat source that has not been adequately defined. The conundrum was so perplexing to the researchers in the mid-1970’s that it was designated the ‘Energy Paradox’, put on a shelf with its resolution pending new data, and survives to the present without satisfactory explanation.

Another problem without solution is the coincidental mega-fauna mass extinction that transpired with these climate spasms 10,000-13,000 years ago, perhaps the most concentrated loss of life within the previous five million years, which promoted modern man to top-billing on the food pyramid. Combine that extensive biological revision with the anthropological demise of the Clovis people, marking the end of the Paleolithic, and we have the mix of ingredients necessary to distinguish a new epoch – the Holocene, meaning “entirely recent.”

Can this transition be linked, as other boundaries on the geological time-scale are now believed to be, to a “Geocosmic Wreck?” The critical answers remain to be determined, whether or not there was a root cause or concentrated series of events that triggered the abrupt shift out of the Pleistocene. Our studies propose to illuminate many of the factors contributing to the “Holocene Mystery.” 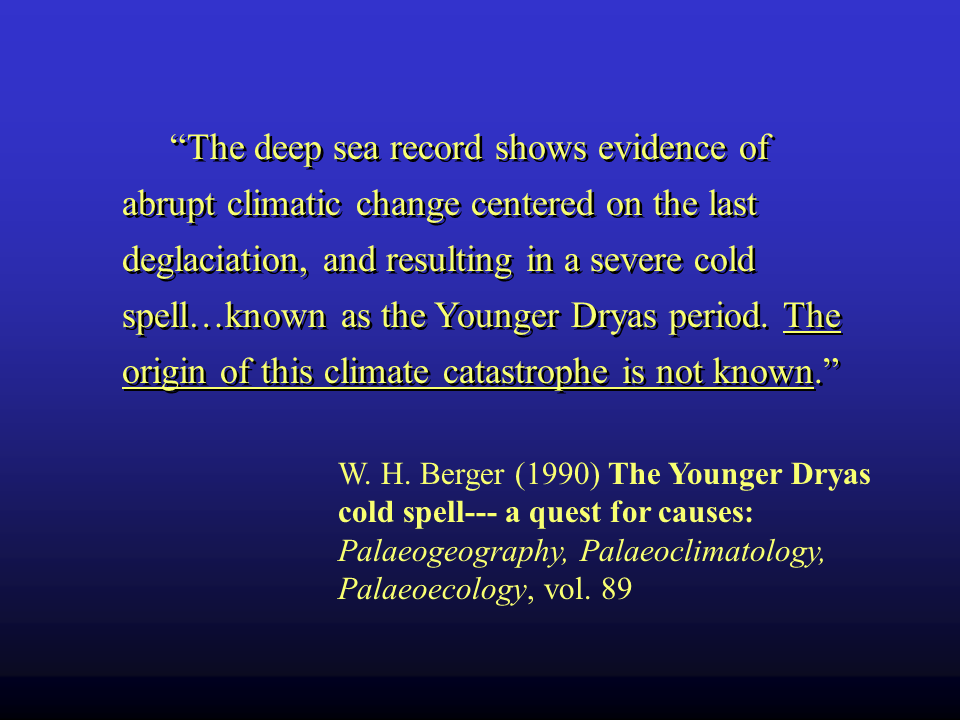