Challenging the doctrine of Uniformitarianism, convincing evidence continues to accumulate that exhibits a magnified scale of events that periodically punctuate the gradual rate of change experienced in the calm and sometimes lengthy interim. Crater-producing impacts, sudden and drastic climate changes, waves of seismic activity and super-volcanism, tsunami-deposited sediments and surges of melt-water into the oceans, all signify episodes of catastrophe unlike any we’ve seen during this latest version of recorded ‘history’.  Terrestrial forces do not adequately resolve the amplified degree of topographic rearrangement that has now been documented, leading to a paradigm shift that recognizes the frequency and regularity of Earth’s direct interplay with the cosmos.  Could it be possible that an organized culture advanced before us, only to be knocked back down by these catastrophes or other collisions with the cosmos?  Did our ancestors devise coded anecdotes to remind and warn us?

Roughly 13,000 years ago, as the most recent Ice Age was waning, a drastic rise in temperature occurred in an extremely short period, and then just as suddenly plunged  to a frigid level last encountered during the glacial depths 5,000 years prior.  This interlude of refreeze, known as the ‘Younger-Dryas’, lasted about 1,400 years, until another equally dramatic rise occurred that dislodged the planet from the grips of the Late Wisconsin Ice Age, and stabilized within a narrow range of the temperate climate in which we currently thrive.  These records were derived from drilling cores extracted during the Greenland Ice Sheet Project (GISP) during the 1990’s.  Both of the ten-plus-degree blasts into warmth displayed in the ice cores are correlated temporally with two massive and distinct infusions of melt-water that refilled the oceans.  Mega-floods from unexplained flash-meltings reshaped the topography under, along and beyond the glaciers, furiously seeking the most direct downhill course, while abruptly elevating the seas enough to drown most settlements established on islands or continental coastlines, and challenging the endurance of human and beast.

So what strange agent could be responsible for administering the unquantifiable energy injection that dissolved so much ice?  This idea is neither original nor unique, but we submit here that our version of the proceedings would enable a comet Shoemaker-Levy 9 type [train of objects that famously penetrated Jupiter in 1994] series of impactors detonating over and into North America.  Providing support for this theory will be an ongoing purpose that guides the organization of this website. 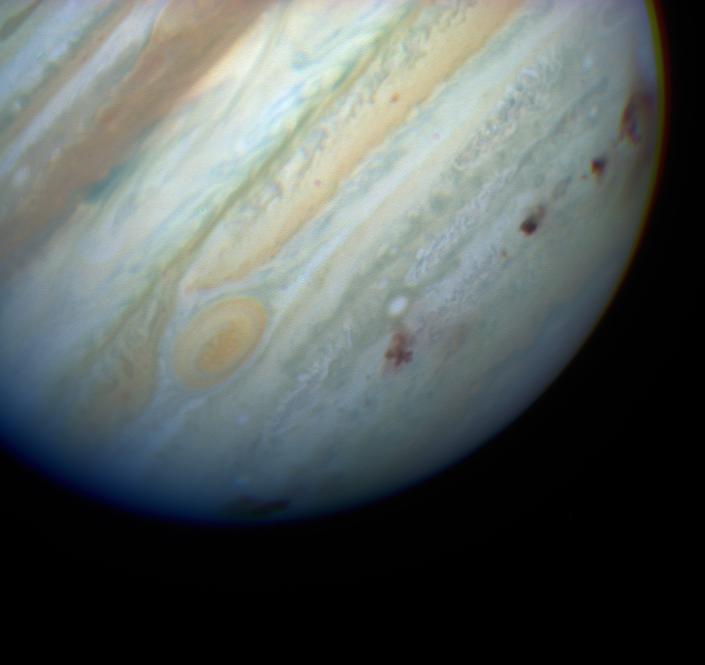 Southern hemisphere of Jupiter shows the scars from sequential impacts